“I could never be as sane as a policeman—but then, you might be bonkers.”

After a tense interrogation by the police, an anarchist falls out a fourth-floor window to his death. Did he jump? Was he pushed, either literally or psychologically?

The public wants answers. Instead, they get a clown. 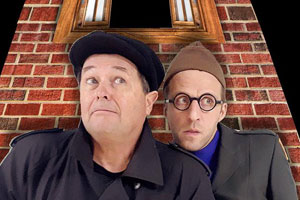 The Maniac—played by clown extraordinaire, Jim Jackson—sneaks into the police station. After making a fool of the officer on duty, he gathers the files on the anarchist case. Posing as a judge, he forces the police to explain their actions, then devises increasingly ridiculous cover-up stories for them.

Dario Fo conceived the play to help his patrons heal after an incident in 1969 Milan. The script digs into actual police reports, arming the public against “fake news.” In Fo’s hands, commedia dell’arte serves as a form of democracy—we may be lunatics, but so are our corrupt leaders.

Alex Williams brings a liquid physicality to the Inspector under investigation. He squirms and wriggles at the slightest order, desperate to save his own neck.

If today’s corruption, injustice and rampant propaganda drive you crazy, why not steer into the skid? After all, only a madman could make sense of this world.

Additional Notes:
Act 2 will probably run 10 minutes quicker by closing night, as the actors get more reps in and can attack their lines at full commedia speed.

If it helps, replace the word “anarchist” with “activist”… at least until the bombs show up.

“The Accidental Death of an Anarchist” jokes about terrorism, police brutality, lunacy and suicide. It contains frequent profanity.