“There is no other course except that which is set by the wind and the sea.”

Called by the ocean, a man bids goodbye to his beloved and sets sail on a solo voyage to circumnavigate the globe.

Neither a survival thriller nor a travelogue, “The Long Way” uses shadow puppetry, sound and exquisite movement to depict the majesty of the sea. Two rigged sails double as projection screens, allowing the puppeteer to cast shadows in tandem with the actor onstage. 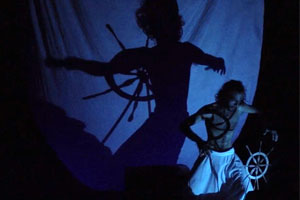 As the sailor, Pratik Motwani puts his considerable physical talents on display, stretching, leaping and perching on the lip of a trunk. He blends mime-like movement and shadow work to evoke various tasks, often laboring in silence. (Those unfamiliar with sailing may struggle to understand the significance of certain activities, but even in mystery they’re beautiful to behold.)

When he does speak, it’s mostly to contemplate nature: the pursuit of flying fish by their predators, a romance between two spiders, the mystery of one’s own name.

The climax hints of Hemingway and Melville, but Pratik’s story rejects humanist heroism for a more mystical synthesis. The sea changes him, broadening his vision until he transcends self.

Additional Notes:
After the show, take a closer look at James Hildebrandt’s shadow puppets, intricately crafted to project different details depending on the light. The woman and the ship are particularly stunning.

Pratik discusses his inspiration for the story in this article by the Colorado Springs Independent. The show takes major departures from Moitessier’s voyage, but it’s still a fascinating read.

“The Long Way” has no content issues. However, the complexity of the experience recommends itself to a mature audience.