“I don’t do women’s lib — I mean, I think people should get equal pay for equal work, but there’s a limit.”

Do you ever feel like the world is rigged against you? In “Parallel Lives,” two well-meaning angels decide that, since birth is the greatest gift imaginable, women should have ever-so-slightly harder lives.

This tiny tweak of gender dynamics quickly spirals out of control, leading to seven hilarious sketches on modern inequality. Topics range from religion to hygiene to addiction to, of course, romance.

Birgitta De Pree and Leslie O’Carroll bring a pervasive sweetness to the material. Both absurdly talented actresses, they dance between comedy and pathos. One moment, Birgitta pantomimes a woman’s morning routine. Seconds earlier, Leslie delivers a melancholy confession on abortion. And somehow, both sketches share the stage with a bit where two guys bro out over their enthusiasm for tampons. 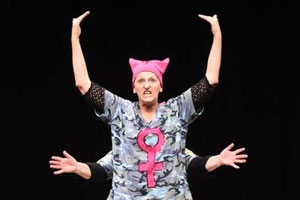 The show hits its comedic high point with a satire on ’80s feminist performance art. Their preachy yet nonsensical spoken-word routine, complete with painfully literal choreography, reveals all the ways “Parallel Lives” could have gone wrong. Thank goodness intermission follows, because the audience was laughing so hard we all needed some fresh air.

No matter the setting—from a teen girl’s bedroom to a cowboy bar at last call—“Parallel Lives” embraces the hope we share for a better tomorrow. After all, “I’m OK, and you’re delightful.”

Additional Notes:
First staged in 1987, “Parallel Lives” should feel more dated than it does (four sketches advocate for gay acceptance). The cast peppers in a few modern references, but they also trust that the heart of the struggle will resonate across generations.