“I don’t want to figure things out—I want them explained.”

Springs Ensemble Theatre uses the word suicide before the play even begins. In a city with so many tragic stories, it’s the responsible choice. They discreetly tuck tissue boxes under chairs and offer pamphlets at the exit.

Unfortunately, the specter of child suicide warps an audience’s expectations. We want answers, and we want to grieve. “Gidion’s Knot” refuses to indulge either of those desires. This play is not a tragedy; it’s a puzzle.

On Monday, a mother meets with a fifth-grade teacher to discuss her son Gidion’s suspension. The teacher is shocked to see her, because Gidion killed himself over the weekend. She tries to postpone the meeting, at least until the principal arrives. But the mother insists on staying. 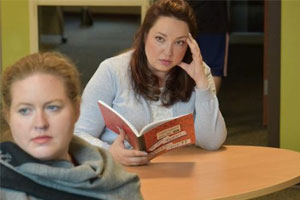 Their conversation unfolds like a Gordian knot. Both women pull at loose threads, discussing school crushes or the debate between art and obscenity. But over time, each thread gets stuck in the same knot: a boy is dead, and we blame each other for it.

This strange dance of hostility and evasion might frustrate viewers who need more catharsis. Why can’t the mother be likeable, or at least pitiable? they might wonder. Why can’t we hear more about Gidion?

Just remember, frustration and limits are the essence of this play. It refuses to cut through the Gordian knot, slowly working out tangles on the surface instead.

Additional Notes:
Holly Haverkorn, a local drama teacher, nails the quiet composure of a teacher facing a hostile parent. She absorbs insults, keeps her voice level, but clearly steers the conversation so the “student” can realize the truth for herself.

At times, the mother’s “shocking” abrasion comes across as affectation rather than character work. But Jenny Maloney shines in the play’s final thread as the women find a safe space to express their grief.